By Rob Rader on August 25, 2017 in In the North Carolina Courts, Litigation 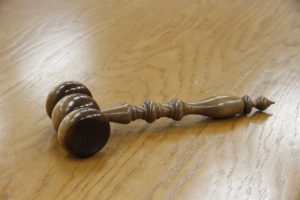 In City of Asheville v. Frost, (COA16-577, filed May 2, 2017), the North Carolina Court of Appeals wrestles with an ambiguous law passed by the General Assembly.  On its face, the law grants only one party (“the petitioner”) the right to demand a jury trial, while denying the opposing party (“the respondent”) that right.  The decision of the Court of Appeals hinges on statutory construction.  The opinion makes no mention of any constitutional challenge to the law.

Asheville Police Officer Robert Frost (“Frost”) was fired for allegedly using excessive force when arresting a woman for trespassing.  He appealed his termination to the Civil Service Board of the City of Asheville (“the Board”).  The Board concluded that his termination was unjustified.  The Board recommended that Frost be reinstated with back pay and benefits.

The City disagreed with the Board’s decision and filed a petition for trial de novo in Buncombe County Superior Court.  The City did not request a trial by jury.  Frost demanded a jury trial in his response to the petition.  The City moved to strike Frost’s demand for a jury trial on the grounds that only “the petitioner” is authorized to request a trial by jury, under Asheville Civil Service Law, 1953 N.C. Session Laws Chapter 747, as amended by 2009 N.C. Session Law Chapter 401 (“the Act”).

The pertinent part of the Act, which is entitled “An act to revise the laws relating to the Asheville Civil Service Board,” provides as follows:

“Within ten days of the receipt of notice of the decision of the Board, either party may appeal to the Superior Court Division of the General Court of Justice for Buncombe County for a trial de novo.  The appeal shall be effected by filing with the Clerk of the Superior Court of Buncombe County a petition for trial in superior court, setting out the fact upon which the petitioner relies for relief.  If the petitioner desires a trial by jury, the petition shall so state. . . . Therefore, the matter shall proceed to trial as any other civil action.”  (emphasis added).

The trial court denied the City’s motion to strike Frost’s demand for a jury trial.  It reasoned that because the Act directs that “the matter shall proceed to trial as any other civil action,” Rule 38 of the Rules of Civil Procedure controls.  Rule 38 allows any party to demand a jury trial.  The City appealed this decision to the Court of Appeals.  In a divided opinion, a three judge panel reversed the trial court.  The Court of Appeals held that the trial court erred in failing to dismiss Frost’s request for a jury trial.

Ejusdem Generis  (“of the same kind”)

“Where general words follow a designation of particular subjects or things, the meaning of the general words will ordinarily be presumed to be, and construed as, restricted by the particular designations and as including only things of the same kind, character and nature as those specifically enumerated.”  Id, at 8, citing

The concurring and dissenting opinions reach opposite conclusions about whether the majority’s interpretation of the Act leads to absurd results.  The absurdity canon applies “where the plain language of the statute would lead to patently absurd consequences” that the legislature “could not possibly have intended.”  at p. 13, citing Pub. Citizen v. U.S. Dep’t of Justice, 491 U.S. 440, 470 (1989) (Kennedy, J., concurring) (emphasis in original).

Judge Richard Dietz, in his concurring opinion, exercises judicial restraint by characterizing the Act, which allows only the losing side to request a jury trial, as “unusual.”  In a damning assessment of the legislature’s work product, Judge Dietz concludes that a right to demand a jury trial enjoyed by one litigant, but not enjoyed by the opposing litigant “is something the General Assembly certainly could have intended.” (p. 2 of concurring opinion) (emphasis in original).

Judge Robert N. Hunter, for his part, gives the legislature more credit.  In his dissenting opinion, Judge Hunter concludes that the General Assembly could not possibly have intended the result reached by the majority.  The dissent points out that the majority’s interpretation of the Act “creates an incentive for a party to lose its proceeding in front of the Board.”  It notes, “[i]n order for a party to qualify as a petitioner, and have the right to a jury trial, a party must first lose before the Board.” (p. 6 of dissenting opinion).

On April 6, 2018, the North Carolina Supreme Court reversed the N.C. Court of Appeals.  Chief Justice Martin’s unanimous decision notes that Section 8(g) of the Asheville Civil Service Law allows “either party” to appeal an Asheville Civil Service Board decision and “the matter shall proceed to trial as any other civil action.”  Consequently, 8(g) incorporates Rule 38(b) of the N.C. Rules of Civil Procedure, which provides, “any party may demand a trial by jury of any issue triable of right by a jury.” (emphasis in original).  Because 8(g) grants a right to a trial by jury, the Supreme Court held that both the respondent and the petitioner from an Asheville Civil Service Board decision may demand a jury trial in Superior Court.

The Impact of Drunk Driving in Personal Injury and Wrongful Death Cases
Creditors: Don’t forget that debtors have rights.